As with other good things in my life, today’s indulgence involving a Nikon D2x — shoots weddings! — and a date with an hibiscus started with an hour’s playing music with a friend who later tossed me a cold beer best consumed out on the patio at a table beneath an umbrella next to which a single potted plant had chosen to express itself with deep red petals and colorfully extended style and stigma.

This is the next day.

After posting on another subject (comment on a book on Soviet history) on another blog, I grabbed the bag with the camera that I had hoped would have produced by now a financially serious living and, ooh baby, such a lightweight Gitzo that with that bag (“Billy” — those who know, know, and we could have much fun chatting further about “style” and “stigma”), there’s never a problem getting out the door in a hurry (except I left the circular polarizing filters in another bag with another camera).

Still, whether a fuse blows while you’re singing at a mic (that happened to me once with the “America Show” at the Omni Shoreham, Washington, D.C. with a fife and drum band behind me and a sea of faces somewhat obscured by the lights behind them: I just pushed a bit harder and whatever I got I gave), or you reach in a bag for a filter that’s not there, you adjust plans, or style, and keep going.

I know the one on my balcony has perhaps gotten old for strangers, but it’s where I take coffee in the morning and enjoy a glass of wine late in the afternoon or early evening.

It’s entertaining out there, although these days I may admit I find a 3 p.m. “feeding flock” moving through the trees opposite rather entertaining too.

In any case, with a camera, a garden becomes its own magical theater, a macro-cosmos of shifting breezes, clouds, and light, suddenly as hot and humid as July, just as suddenly spiked by a cool breath of air or the unexpected appearance of The Bug.

We’re all caught somewhere in the middle of our lives when we’re engaged and focused on the thing we like to do and do well.

Is it work or is it not work?

Meredith is welcome to give me The Call (mid-Atlantic USA, loves gardens, shoots and socializes well).

Outside of the Big Media Cities, How is the market for ambitious photography these days?

I had to shut down “Bertha” (there will be a post soon) for her bad ink shooting habit — next time: Epson, but it’s going to take a $5,000 print order, fifty percent up front, to get me to take that plunge again.  Pulling the plug didn’t feel good, but keeping her warm and hearing her bump and grind started to feel like a daily visit from the protection boys.

No, sir, that business model, that plant that sits in the corner and says, “Feed me!” doesn’t work.

So what to do with this capability?

Except with light tent items or textiles (fashion and catalog), I’ve no urge to be the mass producing object, event, and young person’s photographer: that’s just how I’ve felt when I have felt compelled to watch, say, David Lean’s Dr. Zhivago three or four or more time over the years — it’s so gorgeous!  Also, still, innovative and meticulous in the craft.  As everyone in this game has, I’ve watched my share of film and still enjoy the work of a solid “DP”.

Despite Bresson’s offhand remark about geometry, visual intimacy and surprise may go far beyond workmanlike framing — one wants to work toward the mystery of the object and find in its color, detail, and rhythm its strangeness.

Unless she’s a babe.

Even then, I want more in the story — more atmosphere and mood, more intimation, more “about to happen” or “just happened” or “might happen”.

It was good getting out in someone else’s garden today!

That’s one “bottom line” — the other seems to be finding the clients and projects that pay, essentially validating the value of the effort and sustaining it. 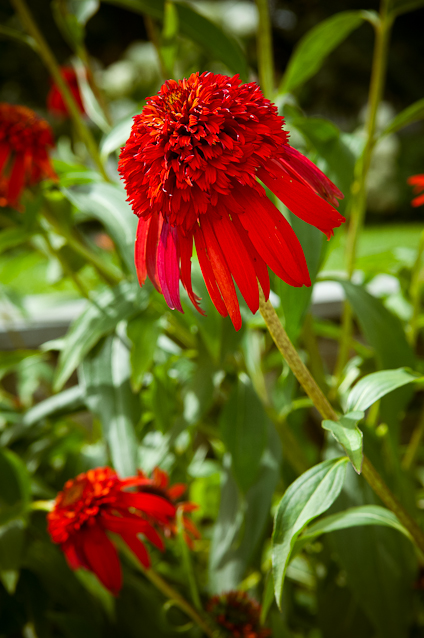